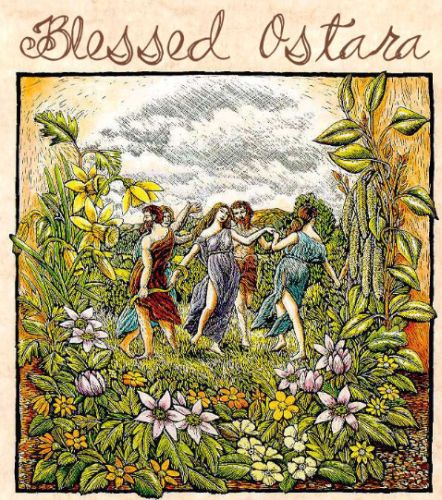 Posted by BarefootedMama at 9:09 AM No comments:

Are going to be very hit and miss for me on here.
It is finals week!
No Magickal Monday today (sorry).
My dreaded math final is on Wednesday. I honestly dislike math with a passion. Well at least the math that I am being forced to take at the college.
I do not see why I have to take it when the degree I trying to get will never ever use college level algebra.
Sorry for the mini rant. I have a few posts in the works that I may or may not get up until Wednesday night. So bare with me one more week.
Things have just been so hectic lately and moving at such a fast pace that I have put this little blog of mine on that back burner.
Hopefully after finals are over with I wont be so hit and miss on here....
At least until the baby arrives than of course I will be taking a few breaks here and there.
First time mama and all.
Happy Monday!
It would totally rock my world if you gave this a click!

Posted by BarefootedMama at 8:23 AM No comments:

31 weeks! Everyone has told me that the last trimester drags on and on… Well it does not feel that way at all. It seems to be going full steam ahead just like this entire pregnancy has gone. I can’t believe that just a few weeks after my miscarriage I manage to conceive our precious little boy and finding out last September that we were pregnant. Now it is the middle of March and there are only 9 weeks left till I finally get to meet this little boy.
Turtle is a little wiggle worm. Although at times he can pretty much scare the crape out of me by not moving. Thankfully I have an awesome midwife who realizes I am a first time mom and will make late night runs to her clinic just to reassure me that he is okay.
I would post the questions I have been doing here (almost) every week, except I still do not feel like much has changed at all. The only new things that have come up is: heart burn is becoming almost an every day norm, and my right ankle likes to swell up.
What babycenter.com has to say about him this week:

This week, your baby measures over 16 inches long. He weighs about 3.3 pounds (try carrying four navel oranges) and is heading into a growth spurt. He can turn his head from side to side, and his arms, legs, and body are beginning to plump out as needed fat accumulates underneath his skin. He's probably moving a lot, too, so you may have trouble sleeping because your baby's kicks and somersaults keep you up. Take comfort: All this moving is a sign that your baby is active and healthy.
Does it look like I am carrying four navel oranges: 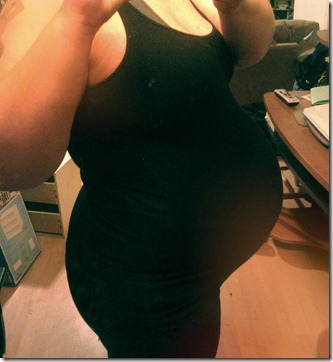 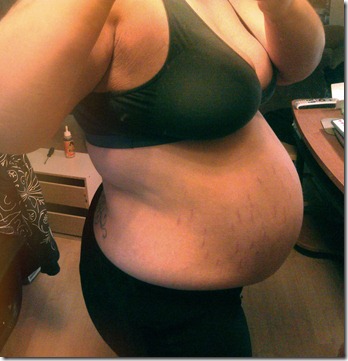 At 31 weeks this is my first bare belly picture. I was kind of nervous to post it. A good friend of mine reminded me that my stretch marks have been earned and I should be proud of my tiger stripes.
Oh and people are finally starting to get brazen about asking me about my pregnancy. I keep getting asked if I am ready to pop and when I tell them that I am not due till the middle of May their eyes get really big. Then of course they follow up with “are you sure there is only one baby in there?” To which I plaster a smile on my face and say “yup!” and walk away.
At least no one has tried to molest my tummy yet (other than friends and family who I’ve let know that it is okay to do so).
Tomorrow, I will post as to why I have been kind of MIA here lately on my blog.
Have a great day! I found this not to long ago and wanted to share this with you. It is written by author: Ariana Athena Firedragon

Reiki Principle
Just for today, I will not be angry.
“Just for today” is what all Reiki Principles begin with, one day. One day at a time, this makes each principle an achievable goal. You need not worry about tomorrow or yesterday. The only concern is releasing anger today.

Anger is experienced by most people, some more than others. It is when anger has no outlet it changes into resentment that weights on us daily. This transition has the ability to cause great chaos within our own lives and rule our emotions.

Anger is a destructive emotion. “You made me angry,” is a phrase often used. However, like all other emotions we choose to be angry. Choosing to be angry is a conscious choice. We choose our reactions to situations; and we are in control of our path, our choices in dealing with situations and others effects our daily life.

We all know there are people out there that just cause problems. For some reason or another we are stuck into a web of drama and dealing with undue problems in our lives. This recently happened to me, and I was caught in that position feeling like I needed to defend myself. When it happened, I was shocked and it caught me off guard. Once off guard, I took the defense. I replied to the middle man using my words. I was shock, hurt at the middle man’s mistrust, defensive because I knew I did not provoke this, and I was angry.

I remembered the Reiki Principles, “Just for today, I will not anger.” I also remembered a sticker I had purchase in last October, “W.I.T.C.H. Women In Total Control of Herself.” So I took a break. I sat in my little happy spot and silently meditated on the issue. It no longer was about the gossiping women, it was about my ability to let small insignificant events bother me. Part of being pagan is, knowing everything is a life lesson. Next time you are in a situation that irritates, angers, pushes your personal boundaries ask yourself, “What can I learn from this?” “What is my lesson here?”

To deal with anger you need to really examine why you are upset. Are you really mad at the person that cut you off? Or perhaps you’re mad at yourself for not getting out of the house sooner. This life is full of stresses but it’s in how we deal with these stresses that we truly begin to grow and change, growing closer to our spiritual path.

Releasing anger is just as important as release negative energy before stepping into circle. You wouldn’t go into circle, with anger or mistrust with your fellow pagans, would you? Why would you go about your day carrying anger and mistrust in you? Release it all. Take a shower and visualize the healing water cleansing you all the negativity. Physical activities are a great way of releasing anger. Activities such as going to the gym, getting involved in a sport are a huge release. Also having a good support system to vent and communicate your feelings. Even writing it out in a journal will help.

Don’t be afraid of or ignore your anger use it to help you grow. So together. Just for today, I will not anger. 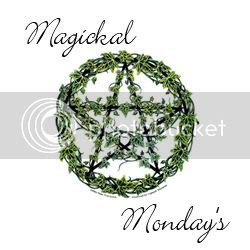 Posted by BarefootedMama at 7:24 AM No comments:

Been really busy the last few days. Hence why I am posting this from my phone today. I just wanted to check in and let everyone know I am still here.
I'm 30 weeks today! Only 10 more to go! Where has the time gone? Seems like it was just yesterday I found out I was pregnant and now I'm about to become a mom to my lil man!
Idk how these photos are going to show up but besides a belly bump pic there will also be a few pic from earlier today when I learned how to make soap from scratch. 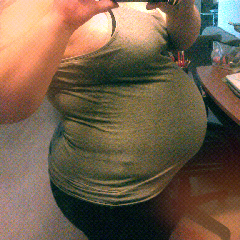 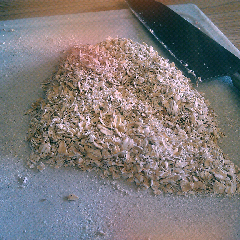 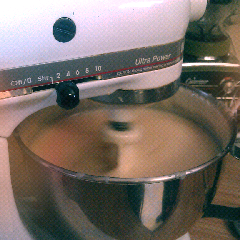 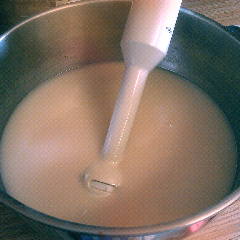 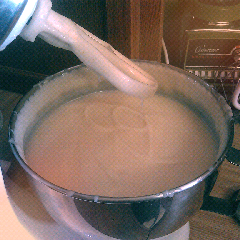 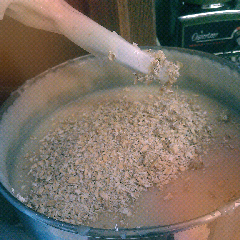 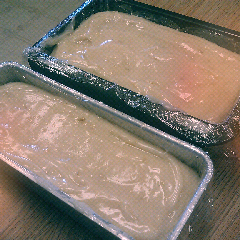 Posted by BarefootedMama at 4:35 PM No comments:

Saturday I went to my best friends baby shower. I am due 3 days before her. So it was nice to get out of the house and to actually have a reason to dress up! Here are some pics of that day.

Oh and please don't mind the swollen face, I am finally at that stage where everything is swollen! I am so looking forward to it going away after baby boy gets here. 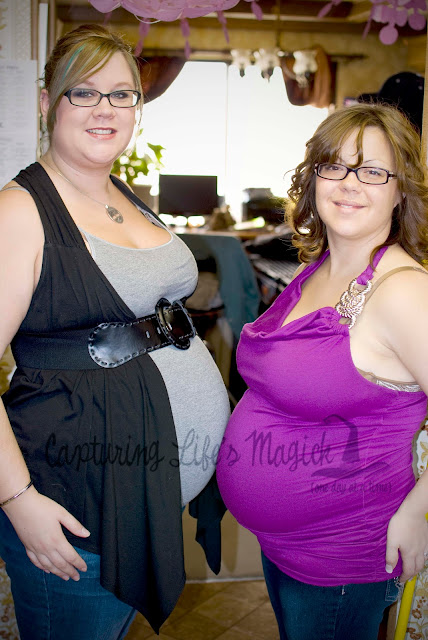 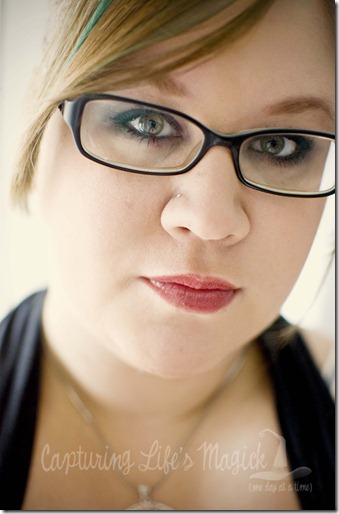 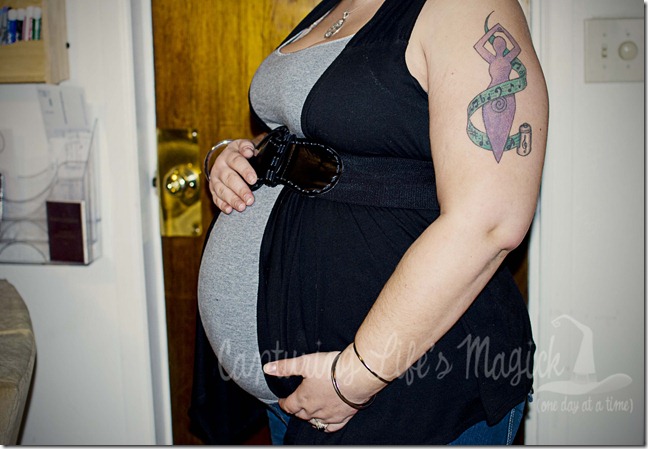 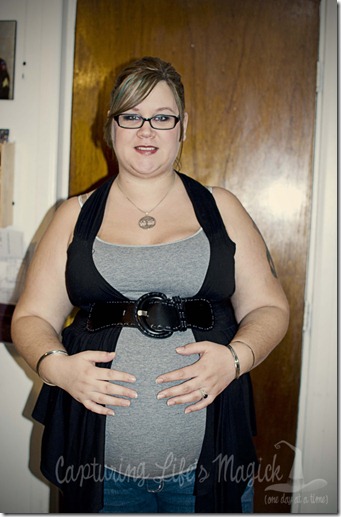 Top: Target
vest and belt : Vanity
pants : Motherhood Maternity
Posted by BarefootedMama at 2:27 AM No comments: 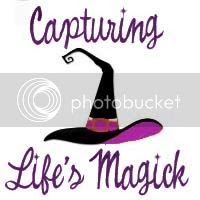 Posted by BarefootedMama at 7:21 AM No comments:

Wow, I can't believe I've already made it to 29 weeks! It seems like time has just flown by! Officially 11 weeks left to go!
Last night my midwife came by for a home visit where she talked about the birthing process with Matt and I. It was very interesting. A lot of it I have already read or watched on You Tube. Matt on the other hand was full of questions.
This is getting so real! I seriously CAN NOT wait to finally get to meet my little man! 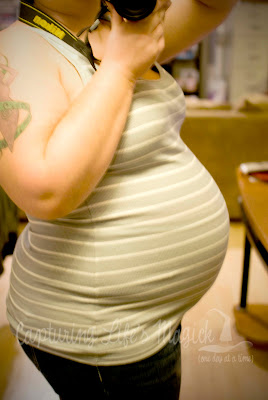 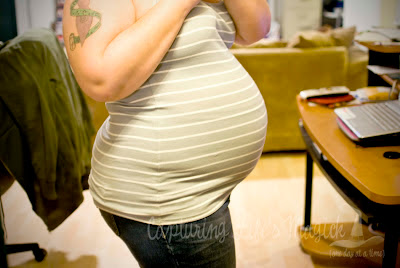 How far along: 29 weeks!
How big is baby: Your baby now weighs about 2 1/2 pounds (like a butternut squash) and is a tad over 15 inches long from head to heel.
Maternity clothes: I am in maternity pants and some maternity shirts. I am still able to just wear regular tank tops as long as they are xxl or long in the torso. Otherwise they are almost to short.
Stretch marks: Yes
Sleep: It’s okay. Some days are better than others. So days I get to sleep a lot (6-8hrs) other days my insomnia kicks in from early on in the pregnancy and I am lucky to sleep at all.
Best moment this week: Matt and I did our taxes finally and we are getting back more than we thought. I can’t wait for it to come in – lots of baby shopping!
Belly button in or out: Still in.
Craving: Ice cream (specifically My Fro Yo), hash browns and eggs smothered in Tabasco, chocolate milk
What I miss: Being able to sleep on my tummy; being able to have the occasional glass of wine. Energy.
What am I looking forward to: Getting my income taxes back!
Milestones: His muscles and lungs are continuing to mature, and his head is growing bigger to make room for his developing brain.

Posted by BarefootedMama at 7:29 AM No comments: