Understanding Beliefs
I initially set out to write a post about interfaith, set out to try and help people out there who may be struggling to deal with a family that celebrates multiple traditions.  Instead, I got help understanding my husband, Joshwa’s evolving beliefs.

It was eye-opening to realize that this wonderful spiritual transition – an accepting and deepening of convictions – was happening before my eyes, in my husband’s quiet way.  And I was so busy trying to shove him into a Christian box that no longer fit, that I was making the same mistakes so many outsiders make about our Pagan community.

When we met, Joshwa had begun tentatively exploring his faith and what being a Christian meant to him.  I’d love to say that I started this wonderful transition of bringing my husband to a place of understanding the path he is on; but that honor lies with Brave, my husband’s dear friend, and a Hindi.  It was through interactions with Brave and his family that Joshwa got his first real look at non-Christians and the depth of faith and the outpouring of love he experienced with them confirmed what he had felt but been unsure of before – that there were more than one way to the Divine.  And then he met me, and I brought him into the enfolding warmth of the community that exists in my hometown – a bright, diverse community that spans all age groups and all manner of belief systems.

And for the last six years, I have been making assumptions about where our family stood, struggling to make a tradition that incorporated what I was assuming were aspects of his faith.  And I found myself endlessly frustrated as I attempted to incorporate church events (such as Christmas eve services, and Easter services) and found Joshwa at best blasé and at worst down-right belligerent to the ideas.  I had begun to worry that I had turned my husband away from his faith, but still I soldiered on, thinking that I was doing best for him, because one day he would wake up and realize that he’d allowed his faith to fall by the wayside and he’d want to embrace them again, and here they would be waiting for him, just as he left them.  But as I sat down to write the original article I thought I would be so clever as to write, I wanted clarification on a few things.

And that’s when I discovered, I’m not in an interfaith marriage, any more than most Pagan couples.  Yes, we worship different Deities, but in the end, Joshwa is no more a Christian than I am – at least not by modern views of Christianity.  You see, my husband is a follower of Jesus, but he does not worshipJesus.  Which means that over the years, he hasn’t celebrated religious Christmas and Easter, because he doesn’t believe that he should; because my husband does not believe that Jesus is important in and of himself – Jesus is merely the physical vessel of the Power of God (better known as the Holy Spirit), which is literally just the flexing of God's power. (by God, I mean Elohim, though we believe He is the same Divine as Danu and the Dagda, my own Deities)  He has been slowly developing these beliefs through close interaction with God – a close interaction that he has found through ritual the way we perform it.

All this time, that's been brewing inside him, slowly developing until we sat down and talked about it, leading him to finally put into words ideals he'd been firming up within his own mind and heart.  And I'd never have known, would never have stopped long enough to find out if I hadn't decided to try to write a blog post for someone else - if I hadn't had that push to find out what, exactly my husband believed.

Don't forget to talk to your loved ones, even if you think you know them better than they know themselves.  People change - we always hope it's for the better - and the only way you're going to know about the change is if you open you ears and your heart and listen. 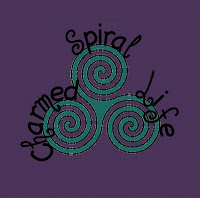 Check out her blog here. 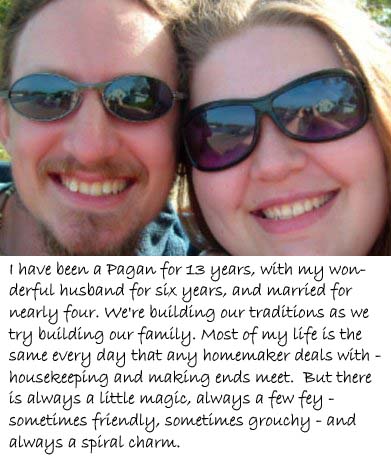 Posted by BarefootedMama at 5:00 AM
Email ThisBlogThis!Share to TwitterShare to FacebookShare to Pinterest
Labels: magickal mondays, pagan, wiccan, witch