Yesterday we finally got to go see our little one, whom we have nicknamed “our little turtle”. Matt says that it makes sense that we would nickname our kid this since I tend to have a little obsession with turtles.

The ultra sound tech was completely cool too. She gladly took the envelope that we gave her to put the gender of the baby in and while she was doing the ultra sound she would let us know when to look away from the screen. Although Matt later told me that he kind of peeked and thinks he knows what the sex is. I then proceeded to call him a jerk (jokingly of course) and told him he better not tell me what he thinks it is.
The best part is that the tech asked us to go to the waiting room while she wrote it down and when she came out to give us the card let us know she included a picture of the baby’s gender in the envelope too. That was very thoughtful, I damn near cried. Now that we had the envelope in hand we met Lacie who is making the gender reveal cake and gave it to her. She has been teasing me off and on today that she knows what it is and is NOT going to tell us.
Mean, just plain mean I tell ya! At least it is all in fun and games. Looking back I can’t believe the difference from our first ultra sound to this one. Little Turtle has changed so much since then: 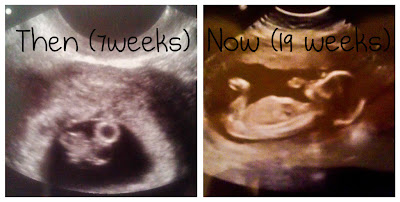