I've been having a really hard time sleeping lately. I get enough sleep, I guess. When I sleep I sleep [other than getting up 20x's a night to pee]. I wish I knew what was going on. Seems like at night when my mind is racing, I feel depressed. Like something is eating away at me and I don’t quite know what it is. I keep having these weird dreams and it leaves me wondering if this might be the cause of the sleepless nights.
I dream about miscarrying again. Only this time there is a lot more blood, I’m talking hemorrhage style here and I lose the baby again. Every time I wake up in a cold sweat and have to check myself in order to be sure everything is fine. A few of the other mom’s I know have told me that those nightmares are normal, especially since right before I got pregnant this time I had suffered a miscarriage. I am thinking about scheduling another ultra sound to put my mind at ease.
I don’t know…do you think this could be linked to my not being able to sleep? Or am I just being paranoid?  I am 10 weeks now, I should be able to hear the heart beat by now, and I would love to be able to hear that. It may be the one thing that reassures me the most, even if I do think I am freaking out over nothing.
I know that I hope these dreams and this depression lightens up soon. Thanks for listening [reading] and bearing with me on my little rant.
Posted by BarefootedMama at 6:08 AM No comments:
Email ThisBlogThis!Share to TwitterShare to FacebookShare to Pinterest
Labels: baby, miscarriage, nightmares, sleep

Some things have been stirring in around in my head. Just some random thoughts. Mainly about my mom. The one I never had and the one you should have gotten the chance to be my Grandmother instead of raising me. One of my biggest fears is becoming my mother. Another fear of mine leaves me wondering if I have the stregnth to be the mother my Grandma was to my little sisters and I.
You see, my mom walked out on us I don't know how many times. You see she had a cruel sickness that consumed her. It made her a monster, it made her hateful and mean, it took her away from us. She couldn't control her sickness, instead she let it control her. She was addicted to drugs.
At times I resent her for not being strong enough to get well for us. Her children, her little girls and her husband were pushed away for her next fix. My Dad and Grandma tried their hardest to get her the help that she needed. She would get clean every now and again. I loved those times. When she was sober she was the mother I always wanted, always knew she could be.
And then something would happen. She would run into an old friend or one of her brothers and she would fall back down that hole again.
The last time I saw her before she died, I said some pretty hateful things. I was very angry with her for chosing to be sick, rather than getting well and being with us.
She missed so many firsts. First crush, first boyfriend, first dance, graduation, the birth of her first grandchild, and my wedding. Now with my pregnancy, it is just another thing that she will miss out on. Granted she may not be in this world any longer, but it does not make it any easier knowing that she had the potential be an awesome mother and chose not to be.
Now the woman who took her place. My Grandma. She was somethign else. She took us girls in, helped my Dad raise us. She was there for everthing. I love her more than words could ever express. When she passed it was one of thee worst days in my life. Even now I am getting teary eyed thinking about it...
When her first great grandchild was born she was so happy. I really wish she was here to meet her third great grand child. My biggest hope is that I can be the mother she did not have to be.
﻿
Posted by BarefootedMama at 3:02 PM No comments:
Email ThisBlogThis!Share to TwitterShare to FacebookShare to Pinterest
Labels: baby, grandma, grandmother, mom, mother

At the zombie walk today. Check out my awesome make up! 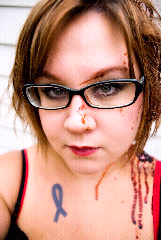 Posted by BarefootedMama at 2:07 AM No comments:
Email ThisBlogThis!Share to TwitterShare to FacebookShare to Pinterest
Labels: life, zombie walk

I'm still here. Still trying to get these new hormones under control. I feel exhausted all the time. I feel like I have slept more in the last few weeks than I ever have. The last few days I have had bouts of energy, and I am so stoked about that. It means I can get caught up on the loads of laundry I need to fold and finish cutting down the flowers in the front yard for winter.
Tomorrow is Tri-Cities first annual Zombie Walk, we are pairing up with the cities Film Festival. All our hard work will finally see the light of day tomorrow. We only hope we will reach our goal for donations, even if we don't whatever we have will go to the Cancer Society to fund their research for Brain Cancer.
Well, that's all I have for now, Hubby made spaghetti for dinner and it is calling my name...
Posted by BarefootedMama at 9:09 PM No comments:
Email ThisBlogThis!Share to TwitterShare to FacebookShare to Pinterest
Labels: film festival, hubby, pregnancy, zombie walk

I went to the doctor yesterday and got my very first ultra sound.
Everything seems so much more real yet so surreal at the same time.
I got to see my baby, I got to hear the heart beat.
And when my husband came in and took my hand, I admit that I cried just a little too.
From the measurements they took I am 7 weeks 4 days and due date is estimated to be
May 20th. 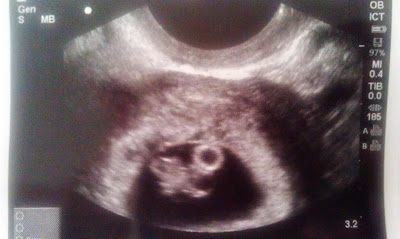 Hope you like seeing a little snap shot of my lil' one.
Have a good day!
Posted by BarefootedMama at 5:24 PM No comments:
Email ThisBlogThis!Share to TwitterShare to FacebookShare to Pinterest
Labels: baby, hubby, ultra sound

I’m awake. Have been since around 3 AM, I tried to go back to sleep around 4. That so did not work. After an hour of tossing and turning I got up. Ate a bowl of cereal, and then it hit me. I am getting my first ultra sound today. I finally get to see my baby. I will finally know how far along I really am. I will get to find out if there is only one or if it is twins, since they run in my family and it is my generations turn to produce twins. I can’t begin to describe how excited I am. 10 AM seriously can’t get her fast enough!
By the way, when does this ever insistent craving for chocolate milk go away? Seems like that is all I want anymore. It can’t be regular milk….no, has to be chocolate milk.
On a side not I know I have been so bad at blogging lately. My only excuse is that I have been really tired. I think I have taken more naps now than I ever have in my adult life and I am still tired! I have had almost no motivation to do anything other than sleep. Which totally sounds worse than what it is, I do stuff, now with naps in between. Unfortunately my house is still a mess and not up to my standards. It would be nice if the hubby helped out since most of it is his mess.
I mean seriously, he drags all this stuff out then dumps it in the most inconvenient places. Even before I got pregnant, I could not lift/drag half of it around cause of how heavy it is. I know I am being Betsy Whiner right now but damn it I want his mess cleaned up. If I could I would totally throw it outside, except that would be so mean. Anyway, before I go on a rant about that I will stop, because he did promise to clean it up today. We’ll see.
Oh and look out for ultra sound pictures! I will totally be posting some later today!
Posted by BarefootedMama at 8:47 AM No comments:
Email ThisBlogThis!Share to TwitterShare to FacebookShare to Pinterest
Labels: baby, hubby, ultra sound

Wow, the last few days I have been so exhausted! The morning sickness has subsided but I think it is only a temporary reprieve. Of course it would be nice if it was gone already. Other than heartburn most of the time and being super tired, most of my symptoms have vanished. I really don’t know if that is a good thing or not.
My first ultra sound is this coming Thursday; I am both super excited and scared out of my mind. I know I saw the nice plus sign four different times now but…
I am still afraid that there will be nothing in my womb. I know I can’t be the only one that has felt this before. I am conflicted, I know that everything will be fine and we will hear our baby’s heart beat and see him or her for the first time. Then there is that other part…
Matt and I have already seen one midwife and we are scheduled to go see the others in the Tri Cities. She eased Matt’s fear of having an at home birth, for which I am happy about. She answered all of our questions and then some. If we were to choose right then and there it would be her.
The reason we didn’t choose her right then and there is because we need to interview other midwives and not choose the first one that we come across.
Posted by BarefootedMama at 9:09 PM No comments:
Email ThisBlogThis!Share to TwitterShare to FacebookShare to Pinterest
Labels: baby, hubby, midwife
Newer Posts Older Posts Home
Subscribe to: Posts (Atom)